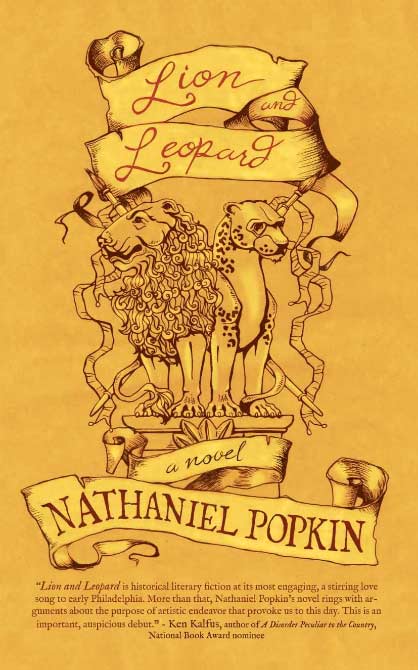 A journey into a lost America, an artist’s search for a new language of expression, and a tragedy that cuts it short.

In Lion and Leopard, Nathaniel Popkin’s penetrating, descriptive eye meets a cast of painters, each of whom believes he holds the key to the future of American art. It is 1818 and the streets of America’s most acculturated city teem with fakes, wannabes, and exiles.

Popkin’s work is often grounded in the past, but never settled there. Lion and Leopard has as much to say about contemporary America and contemporary literature as it does about the color palette of painters named Peale, Sully, Hicks, and Krimmel. Meditative, melancholic, and also maddening, Lion and Leopard reveals an author gazing in every direction, all at once.

“Popkin weaves a multileveled tale that is as much a treatise on art at a historical crossroads as it is a story of young artists making their way in the world.”
—Library Journal

“Lion and Leopard is historical literary fiction at its most engaging, a stirring love song to early Philadelphia. More than that, Nathaniel Popkin’s novel rings with arguments about the purpose of artistic endeavor that provoke us to this day. This is an important, auspicious debut.”
—Ken Kalfus, author of Equilateral

“For love of sketchbook, observation, and pictorial inspiration, as if the whole of history and time depended on it, Nathaniel Popkin’s Lion and Leopard entangles classical and romantic ideologies in a struggle to commence a truly American artistic vision.”
—Michelle Grabner, Whitney Biennial curator, Art Institute of Chicago

“Any history of visual art in America should include a review of Nathaniel Popkin’s Lion and Leopard, a fictionalized account of early-American painters that illuminates brilliantly how building a culture is so much more than building a country.”
—Foreword Reviews (finalist)

“An even greater strength of the book lies in the characters, whose compelling stories unfold with intensity frequently relieved by sly humor. Highly recommended.”
—Historical Novels Review