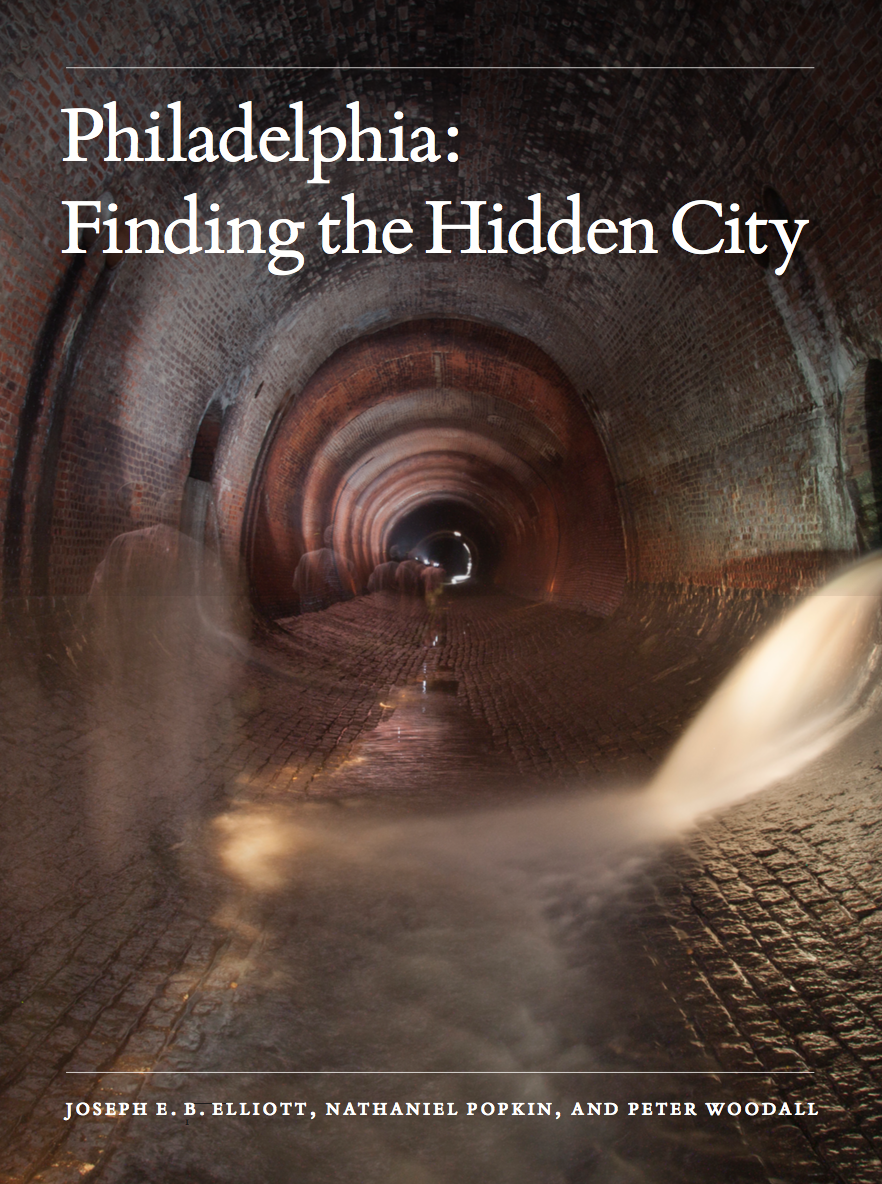 Philadelphia: Finding the Hidden City is a journey to the essence of one America’s greatest and yet least understood cities, Philadelphia, to reveal the physical and cultural intricacies of place, from the intimate to the monumental.

Written by two expert urban observers, Nathaniel Popkin and Peter Woodall, and photographed by one of America’s most lauded architectural photographers, Joseph E.B. Elliott, the book marks out the elements of Philadelphia’s hiddenness through its vivid layers and living ruins. Quite unlike books of urban loss that lament or celebrate decline, Finding the Hidden City connects Philadelphia’s particularly accretive form to its idiosyncratic history, culture, and people. By laying out these connections the authors develop an alternative theory of American urbanism to contrast with the better-understood narratives of New York and Los Angeles. The journey here is as much visual as it is literary; Joseph Elliott’s striking photographs reveal the elemental beauty of Philadelphia never before seen.

Listen to Nathaniel Popkin on the Skylines podcast talking about Finding the Hidden City.

Listen to Nathaniel Popkin on the Give and Take podcast talking about Finding the Hidden City.

“There are moments when […] the city runs right through your bones. Part history, part tour guide, part civic manifesto, Philadelphia: Finding the Hidden City traverses and decodes the city as it goes. Along with Elliott’s one hundred-plus striking photographs, this alluring book not only shows where to look, but provides an adept context on how to see and read the city’s countless layers.”
—Thomas Devaney, Bomb Magazine

“With stunning photographs and vivid prose, ​Philadelphia: Finding the Hidden City takes us on a fascinating journey through the submerged urban realm and provides an essential Baedeker to Philadelphia’s past by offering entree to its hidden places of privilege, production and prayer.”
—Michael Z. Wise, author of Capital Dilemma: Germany’s Search for a New Architecture of Democracy

“From neighborhood churches and factories to former prisons and power plants, Philadelphia: Finding the Hidden City reveals an urban landscape and way of life that has all but disappeared. Nathaniel Popkin and Peter Woodall unearth the soul of a city and recall a time when dreams were manifest in brick, carved wood, iron, and stone. Joseph Elliott’s poignant photographs show the care and craftsmanship invested in the making of these spaces, evoking a sense of awe and mystery, and also a sadness for the fragility of this built environment, reminding us of the need to preserve a cultural history being swept away by indifference in the name of modernization.”
—Christopher Payne, photographer and author of Asylum: Inside the Closed World of State Mental Hospitals

“A winner—both in prose and in images.”
—J. Michael Welton, Architects + Artisans

“This collaborative project between two journalists (Popkin and Woodall) and a professional photographer (Elliott), all of whom share a common interest in Philadelphia’s oldest built environment, does not highlight the restored tourist destinations in the City of Brotherly Love but rather its more neglected parts, where splendid buildings are beginning to decay. It takes readers through a brief tour of Philadelphia’s cultural history from 1916 to the present and provides historical context for more than 25 structures, including bridges, buildings, a railroad, and a water filtration chamber. More than 100 beautiful color photographs fill the pages…. VERDICT This will interest anyone who wants to become familiar with Philly’s off-the-beaten-path historic areas. Readers interested in a slice of the city’s lore and architectural history will also find it enjoyable.”
—Library Journal

“There are times when the prose writing takes an almost poetic turn, in particular when discussing the layers of ruins that comprise a city. I found myself thinking of Italo Calvino’s Invisible Cities more than once while reading Finding the Hidden City.”
—Todd Woodward, Context Magazine

“A timely manifesto of urban exploration, a fascinating patchwork of secret histories, and a riveting formula for distilling Ozymandian enchantment from industrial rubble and rust.”
—Lev Feigin, Broad Street Review