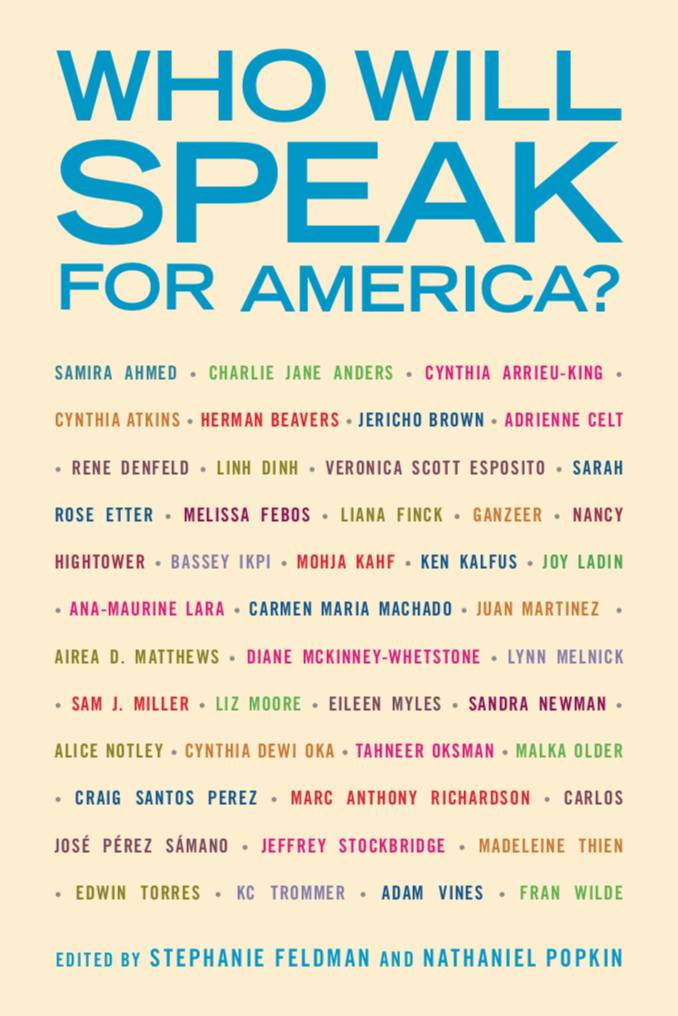 WHO WILL SPEAK FOR AMERICA?

In this lively collection edited by Stephanie Feldman and Nathaniel Popkin, 40 novelists, essayists, poets, and artists confront the political division heightened by the Trump presidency and imagine a just future for the USA.

“We are a people in a quandary about the present. We are a people in search of our future. We are a people in search of a national community.” This eerily familiar assessment was written by Congresswoman Barbara Jordan, in 1976, in the wake of Watergate and the failed and divisive presidency of Richard M. Nixon. Jordan went on to pose a striking question to the nation: “Who then will speak for America?” More than forty years later, with American society now fractured, some of the nation’s most resonant literary voices join together in this volume to search for answers. The novelists, poets, artists, and essayists who contribute to Who Will Speak for America?—among them immigrants and refugees, men and women of color, gay and trans people, Christians, Jews, and Muslims—tackle the question of American identity and society, offering visions rooted in our history but attentive to our many possible futures. They confront the pain, confusion, and terror of the Trump era with resilience, bravado, reflection, and beauty. Speaking for America they beg you, the reader, to listen and respond.

Listen to co-editors Stephanie Feldman and Nathaniel Popkin discuss Who Will Speak for America? on Aspen Public Radio’s First Draft.

Listen to co-editors Stephan Feldman and Nathaniel Popkin discussing literature and the resistance on Book Fight.

Listen to Nathaniel Popkin on Jefferson Public Radio’s Jefferson Exchange discussing Who Will Speak for America? and literature’s role in the resistance.

“A wide and well-selected array of moderate, progressive, and radical voices united in opposition to Donald Trump’s presidency.”
—Publishers Weekly

“Panoramic in scope and exquisite in execution, Who Will Speak for America? is a platform for some of the country’s sharpest minds to artistically meditate on life during and after the reign of our Orange Mussolini.”
—Molly Crabapple, author of Drawing Blood

“At too many points since Trump’s election, my mind went to leaving this country. But Who Will Speak for America? is one of the greatest reminders I’ve had not to stray again. That we are the majority—we who represent a whole spectrum of gender, sexuality, ability, race, ethnicity, nationality, class, and more—and we will take back this country forward from the few who want it to go backward. A potent and necessary read for everyone on this planet, really.”
—Porochista Khakpour, author of Sick

“Powerful…images that stay with you as long as the words do…ultimately creating a shared unity among those looking for ways to respond and resist and grappling with questions of identity and place.”
—Melissa Stern, Jewish Exponent